Making a Way for Ducklings

“DADDY! THERE’S A DUCK IN THE NEIGHBORHOOD.” Little did I know the effect this simple declaration by my 10 year old before she went to dance class would impact my Saturday. At the end of it I was still in my PJs, soaked from head to toe, covered in dirt, but with a couple happy families. And I had more knowledge of storm drains than anyone really needs.

Sure enough, there was a duck in the neighborhood. This isn’t that odd, considering we’re less than a half a mile (as the duck flies) from a nice regional park with a lot of water. What was different is that it was a single female duck, wandering around the sidewalk across the street, quacking loudly and continuously. OK, so a cranky duck. “I think I hear ducklings,” Bella declared as she got in the car and left. Sure, kid. You hear a lot of things.

Being the dutiful father I am, I went outside to take a look. It’s raining, and I’m still in my shorts and t-shirt. I realized that yes, in fact, there was a distinctive “peep, peep, peep” coming from somewhere. So at least now I know what’s going on: momma duck can’t get to one of her babies and is freaking out about it. It sounds like the duckling is across the street in someone’s yard, so I walk over there, but as soon as I do, it sounds like it’s back over on my side of the street. Eventually, I look down. 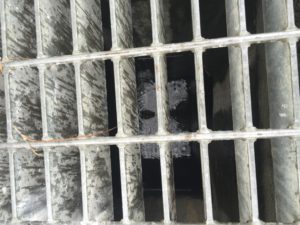 A lonely little duckling down in the storm drain. 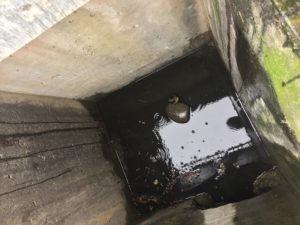 After removing the grate from the storm drain, it’s a little easier to get to the duckling.

Yes, sure enough, there’s a duckling down in that storm drain. It must have fallen through the grate and now it’s trapped. Momma duck doesn’t appear to know exactly where her baby is, probably for the same reason I didn’t at first – lots of echos through the drains and off the houses. She’s now fled around the corner, near another drain where the sound is bouncing through. I get myself a dustpan, pull the grate off the drain, and without too much trauma to the baby manage to get it scooped up. Now I just need to walk across the street and release it somewhat close to momma and all will be well.

I walk across the street, but this little guy is having none of it. He eventually jumps out of the dustpan, but he’s running towards momma duck, so I think we’re all set. At the last second, he changes his mind and takes a dive into the other storm drain. Well great, I get to do this all over again now, except this drain is dry and it’s not going to be that easy. So I pull the grate off that drain as well, but I do not see the duckling there. I see two ducklings. Alright, we can do this. But I need a box.

I get my dustpan and an Easter basket that’s been sitting around in the garage, and go to retrieve the siblings and get this mess sorted out. Remember I said this drain was dry? So no easy scooping here – those two immediately ran up the drain exit. You see, we have 4 drains in the neighborhood, three on the streets and one in the swale by the playground, and they’re all connected. So now they’re running somewhere between the drains, and all I can hear are echos. 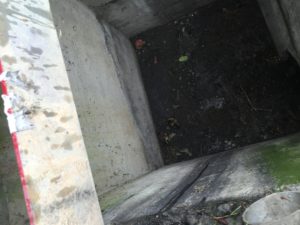 All he wanted was to keep his brother company!

Right then, Animal Services drives up and I flag them down. Someone must have called them earlier, because I was only just getting to it since I was now out of my depth. They, unfortunately, are not much help. They tell me there’s nothing they can do if the ducklings are up in the system under the street, so they help me put the grates back and take off. Seriously, I know it’s just a couple ducklings and they’re not exactly endangered, but I could have used a little help. They may be done, but I’m not.

Marcy comes back from dropping the girls off now, and I fill her in on the last details that didn’t go over texts. By this time, I’ve torn up a cardboard box so I can use it to block the exit to the storm drain when they come back. Momma duck is still wandering around quacking loudly, and I can still hear the ducklings peeping. Eventually, the two come back to the dry storm drain, but only one of them wanders in: the other is standing just inside the exit. I take what I can get, block the exit with the cardboard, and jump on in. I get the one duckling, hand him off to Marcy, and haul myself back out. We’re gonna call this guy Hercules Mulligan (yeah, Hamilton is a thing in our house right now).

Brother duckling wanders back over to the wet storm drain, I get him scooped up and in the box as well. Alexander Hamilton reunited with Hercules. Great! Marcy has been on the phone with the Ohlone Humane Society. Now we just have to get momma duck to know where they are and maybe she’ll follow us down the street to the park where we can let the ducklings go with no fear of storm drains. But wait, why do I still hear peeping coming from not-the-box?

Yes, there are three. Back to work. Little guy eventually makes it over to the dry storm drain (which is now starting to fill up a bit. Yeah, it’s still raining). We execute another rescue with the dustpan, without actually having to climb in this time. Marquis de Lafayette joins his brothers in the box, and we celebrate! We still have to get momma duck to know what’s going on here, because she hasn’t connected this peeping box with her babies yet. But at least she hasn’t left. We walk back across the street.

“Do you hear more peeping?”
“No, that’s just the echos from the ones in the box.”

Seriously, do you think we’re that lucky at this point? John Laurens is still hiding out.

Marcy takes the box and starts trying to get momma’s attention. Our neighbors are now wondering what the heck the crazy people are doing, so I have to explain the problem with the storm drains. Little neighbor girl is thrilled and runs off to see momma duck, and eventually fawns over the ducklings in the box. They take off, and Marcy has to go get our girls from dance and gymnastics. I’m just trying to coax John out into the wet drain and get him comfortable enough to scoop him up. At this point, there’s enough water in the system that I’m not climbing into any of these drains anymore, but I do have to keep lying face down in the gutter. So I look like a disaster in my shorts and t-shirt, drenched and covered in debris.

Success! I scoop up the last guy and reunite him with his brothers. The Sons of Liberty are back together and safe! Just to be sure, I start walking around the neighborhood, but there are definitely no ducklings hiding out anywhere else. Positive this time. But momma duck won’t get any closer than about 8 feet from the box, and she appears to have no clue that her ducklings are inside, even though it’s a clear plastic box and there’s nobody standing within 50 feet of the thing. It’s looking now like we might have to take them to the wildlife refuge. 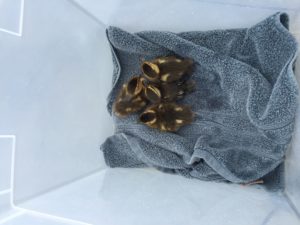 Marcy and the girls get back, there is much fawning over ducklings, and I take the box, and my daughters, to walk down the street to the park to see if we can coax momma duck over there. The park is literally on the other side of the railroad tracks that run behind the houses, so if we can get her to hear them over there or catch her when she’s flying over, there’s a chance we can make this work. Unfortunately, there’s no quick walk over there because of the tracks: it’s almost a mile to cross over the tracks and walk back along the other side. But we do it.

As we’re standing there on the back side of the park, holding this plastic box out towards the tracks as the ducklings peep, the park rangers drive by us twice. Thankfully, they don’t stop to talk to me, but one does go talk to Marcy, who has driven over and is parked on the other side of the trees from us. Not sure how he put that one together. They want to know if we’re trying to catch or release, and she explains what’s going on. He comes down to take a look and chat with me. I explain that the house not 30 feet from where we are is where momma duck last was. Right then she flies up and over our heads, the ducklings peep, and she veers down into the parking lot where Marcy is. I hand off the box to the park ranger, run up behind him, and he lays it down in the parking lot.

Everyone is smiles, momma duck comes racing across the parking lot. All four ducklings make it out and are reunited with momma, and they all start trotting down the path to find some water. The ranger runs up ahead, as the beach is currently closed and there’s a locked gate in the way, so we herd the ducks along the path. We get them through the gate, and they make a beeline for the water. As they get there, a drake shows up and joins them. Obviously, he was doing the hard work of sitting around at the water waiting for the field trip to be over. 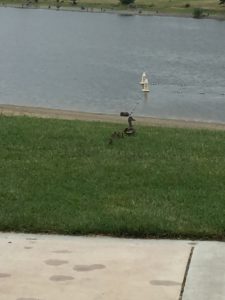 Momma duck and the Sons of Liberty make it back to the safety of the lake.

And this is where our story ends, several hours later. With a very smiley Marcy who suddenly has a happier Mother’s Day, and a very happy Mallard family who are safe in Quarry Lakes. How was your day?